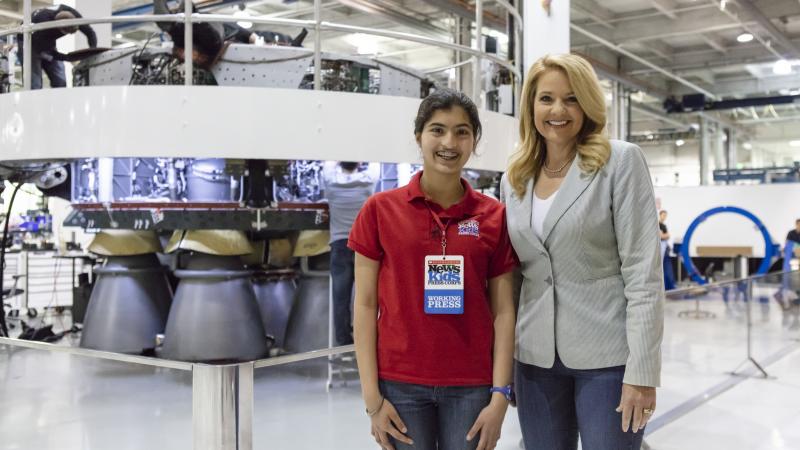 What’s on Kids’ Minds? We Asked Them

The Scholastic News Kids Press Corps is a team of 45 Kid Reporters from across the country and around the world. These intrepid young journalists are charged with reporting news for kids, by kids, on topics ranging from efforts to get out the youth vote in the midterm elections to a Nobel Prize winner’s breakthrough in cancer treatments to an all-ages gathering of tech enthusiasts, tinkerers, and other creative makers.

As part of the application process, students between the ages of 10 and 14 submitted an original news article, two story ideas, and an essay explaining why they wanted to be a Kid Reporter. We received entries from aspiring young journalists everywhere, offering a window into the hopes, dreams, and concerns of kids growing up in a world filled with challenges and opportunities. Among the hundreds of story ideas, three key themes emerged:

1. Kids feel a responsibility to protect the environment.

They were born into a world where the effects of climate change are readily observed, including the increasing number of deadly storms and wildfires.

“I’d like to write about our political leaders and their thoughts on global warming,” a 13-year-old from Wisconsin wrote on her application. “I also want to learn more about what is being done in our community to [address] this issue.”

In September, Kid Reporter Teresa Fang found herself covering Hurricane Florence for her first assignment. The storm hit close to home for the 12-year-old rookie journalist from North Carolina. “The town of Swansboro set a record with more than 30 inches of rain,” Teresa reported. “A neighborhood in Chapel Hill saw so much rain that flooding was at least four feet high.”

Kids understand that humans are not the only ones at risk. The animals and wildlife they love are threatened. Plastic waste in the Pacific Ocean is choking birds and fish.

In his application for the Kids Press Corps, 10-year-old Jaxon Jones of California reported that Americans discard an estimated 500 million straws each day. Jaxon spoke with Chloe Mei Espinosa, a seventh-grade activist from Newport Beach who has convinced her school district to ban single-use straws starting in 2019.

“I want the kids of the future to go into the ocean,” Chloe Mei said, “and see a plastic-free one, with healthy coral reefs and beautiful fish swimming around.”

2. Kids are also interested in the political process and civic involvement.

“I’d like to write about how the criminal justice system works and how it can be improved,” an 11-year-old applicant from New Jersey told us.

“I’ve noticed more kids participating in political marches,” observed 11-year-old Sidonie Gillette from Virginia. “I’d like to spotlight a young activist like Naomi Wadler or Emma González. I might ask for advice that they would give to other kids who want to speak out for the causes they care about.”

3. Young people are keenly aware that scientific advances are changing our understanding of who we are and where we live.

They’re fascinated by artificial intelligence, black holes, and genetic engineering. For them, 3-D printing is no big deal.

“I’d like to interview scientists on artificial intelligence and the current technology that would blend science fiction with reality,” wrote one 14-year-old applicant from California.

“We’ll have people on Mars by the middle of the next decade,” SpaceX president and COO Gwynne Shotwell recently told Kid Reporter Manat Kaur. Someday, girls like Manat will be leading the way in space exploration and other revolutionary technologies. For now, they’re building a strong foundation in STEM-related skills.

Kids want to make a positive difference. They also want to have their voices heard. We’re going to continue to listen to them.

Do you know a student with a talent for writing and a passion for journalism? The Scholastic News Kids Press Corps is now accepting Kid Reporter applications; all applications must be received by May 31, 2019. Learn more.