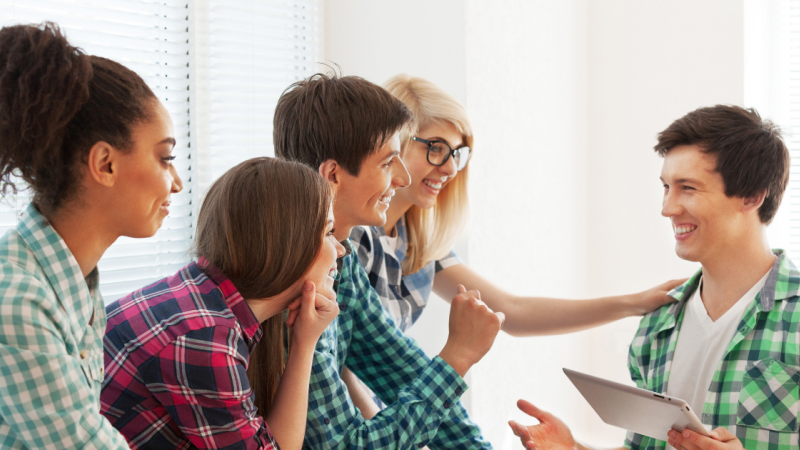 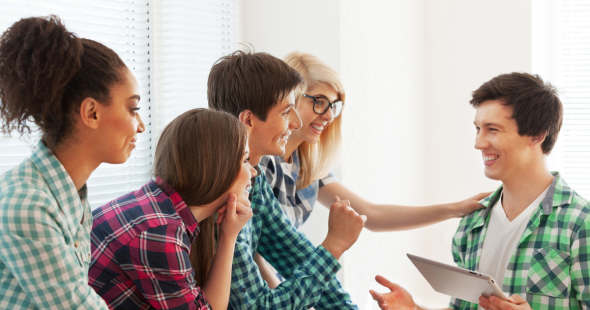 Two teens are crawling on the floor, searching for a lost contact lens. Suddenly another teen yells “Freeze!” He taps one of the teens on the shoulder, then gets down on all fours and takes her place on the floor. He says, “Goo, goo, gaa” to the other teen, who responds, “Goo, gaa, goo!” Now, instead of looking for a contact lens, the teens are babies playing in a sandbox.

If you’ve ever watched an improv show, or done improvisational theater yourself, you probably recognize this scene as an improv exercise. But did you know that the teens playing the game are not just having a great time, they’re also strengthening their social-emotional intelligence?

I recently learned about the benefits of improv when I edited a story on improv for teens for the Scholastic magazine Choices, which focuses on health, well-being, and social-emotional learning for middle and high school students. According to a study published in the journal The Arts in Psychotherapy, teens who participated in an improv group reported reduced social anxiety, reduced symptoms of depression, and also reported increased feelings of hope and creativity. Improvisational theater techniques are used in schools and correctional facilities, corporate training seminars, and professional programs such as the Stanford Graduate School of Business. There’s even a version called medical improv that helps doctors listen to and communicate with their patients.

After editing the story, I believe we all can learn a lot from improv. Here are three of the basic principles that I think can be especially useful and rewarding both in and out of the classroom:

Real life example: A student asks if the class can watch a video. Instead of saying, “No, we need to focus on the lesson,” the teacher says “Yes, and let’s be sure to all focus on the lesson so we have time for the video at the end of class.”

Real life example: A shy student makes a slightly off-the-mark comment in class. Instead of trying to upstage the student by pointing out everything wrong with the comment, another student says, “I never thought of it that way. That’s a really interesting point.”

Real life example: Two students are working together on a presentation for class. Instead of saying “Is it OK if I don’t talk during the presentation?,” one student says, “Public speaking can make me feel nervous. Why don’t you present first, and I’ll be in charge of answering questions at the end.”

I hope you find these principles as interesting and useful as I have. If you’d like to check out our full story, you can find it here.