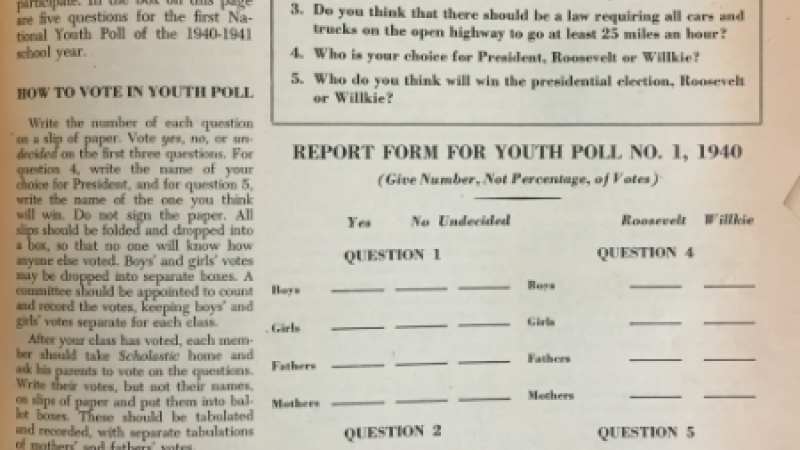 In 1940, the average worker in the United States earned $1,725 per year. The inaugural issue of Captain America featured villainous Adolf Hitler on its cover, and race riots broke out in Chicago, Detroit, Harlem, and Los Angeles.

Across the Atlantic, World War II was raging. In June of 1940, Paris fell to the Germans.

Franklin D. Roosevelt had steered the country through the darkest days of the Great Depression. Now, he was seeking an unprecedented third term as president, running against Wendell Willkie. Among the Republican candidates that year, Willkie was the only one who thought that the U.S. should offer more help to Britain and other Allies battling Hitler and the scourge of Nazism.

In 1940, Scholastic invited students across the country to participate in a mock presidential election for the first time. Young readers chose Roosevelt resoundingly, mirroring the results of the national election.

In the decades since, students have accurately reflected the national vote all but twice. Like their parents, perhaps, they thought that Thomas E. Dewey would beat Harry S. Truman in 1948, and that Richard M. Nixon would edge John F. Kennedy in 1960.

Today, young readers can still make their voices heard. By participating in the Scholastic Student Vote, they can get a taste of what it means to enjoy the benefits—and share the responsibilities—of living in a democracy.

This year, students can opt for Republican Donald Trump, Democrat Hillary Clinton, or a third-party candidate of their own choosing. On our Election 2016 site, readers can also learn more about the candidates, the issues, and the political process.

Who will win the Scholastic Student Vote? Stay tuned. Students who have not voted yet can cast their ballots here.