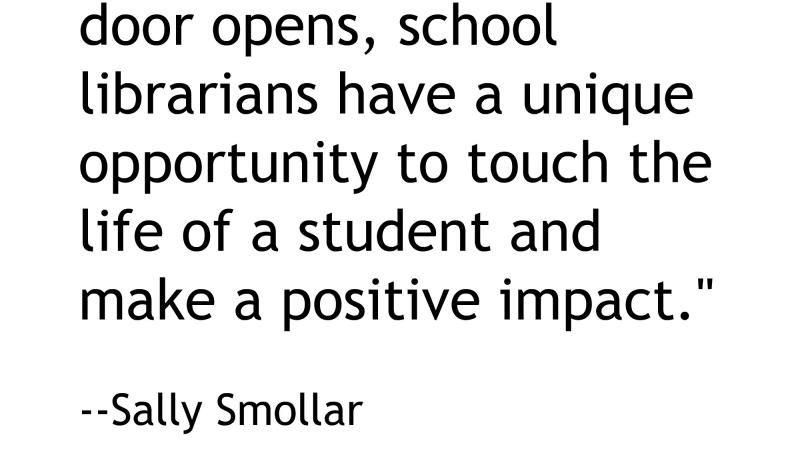 School Librarians Open a World of Possible for Students One day when my son was in the third grade at my elementary school, he came into my library and made a casual remark: "Mom, you are the luckiest person in the whole school."

"Because you are the only one who gets to know all of the kids. The other teachers just see their class for a year and then they move on."

Out of the mouths of babes!

It is true that we get to watch little five-year-olds grow into pre-teens, almost before our eyes. Then in a whirlwind of year-end activities, the summer vacation begins and we never see most of them again. We are in a unique setting unlike any other adult in their lives. At home there are chores and homework and busy schedules. In the classroom there is the ever-expanding demands from curriculum, assessments and overloaded teachers. But in the library the students see someone in front of them who has the time to learn about what interests them, and is willing to lead their exploration through the seemingly endless treasure trove of information and imagination that lies between those stacks.

Often, we encounter a student who makes a first-time connection to reading under our guidance, which leaves us with a glowing feeling of satisfaction. But we often touch their lives way beyond elementary school, sometimes in ways we are not aware of.

One such student was Jessica, a third grader who in 2001 took a family trip to “ground zero,” to view the devastation following the terrorist attacks of September 11, 2001. Upon returning to school, Jessica’s mother Susan asked me to help her daughter create a video documentary of the World Trade Center memorial site. She said that Jessica’s idol was Katie Couric, and she wanted to grow up to be a news anchor. I didn’t think that third graders even knew journalists by name! We spent many afternoons perfecting the project using iMovie on an Apple iMac computer that I purchased for our in-house TV studio. Jessica was well-prepared with photos, video footage of herself with commentary, and a suggestion for the background audio. She even re-recorded a voice-over when the original had too much background noise. It was an amazing project!

I recently ran into Jessica’s mom Susan for the first time in almost 14 years. I asked how her daughter was doing, and she told me that she was working behind the scenes for ABC News in New York City. I said, “That is fantastic! I am so happy that she achieved her dream job.” Susan replied, “It is because of you!”

Another student that comes to mind is Addie, who spent almost all of her free time in my library. I loved to recommend my favorite books, and we eventually agreed on our favorite book of all time, The One and Only Ivan. One day I asked her if she had any plans for spring break and she said that her mom was going to take her on a road trip to Zoo Atlanta to see Ivan, the gorilla from the book. I had to hold back tears when I broke the news that Ivan had passed away three years prior.

One of my favorite days each school year falls around Halloween, when we combine dress-up day with career day. Students come dressed as “what they want to be when they grow up.”  I absolutely love watching them parade off of the bus in the morning, their little faces beaming with the pride of their career choices—chefs wearing white hats, police officers, doctors wearing stethoscopes, lawyers in suits with briefcases, etc. A third grade girl named Olivia passed me by with a cute sweater-dress but had no distinguishable accessories. I said, “What are you dressed as?” She turned around and lifted up her reading glasses, which were draped around her neck with the exact same green beaded chain as mine, and said, “I’m going to be YOU!”

Once again, I was reminded of the power of connecting people to stories, information, and opportunities, and the idea that you don’t always know which connections will be the most enduring. Every time the library door opens, school librarians have a unique opportunity to touch the life of a student and make a positive impact.