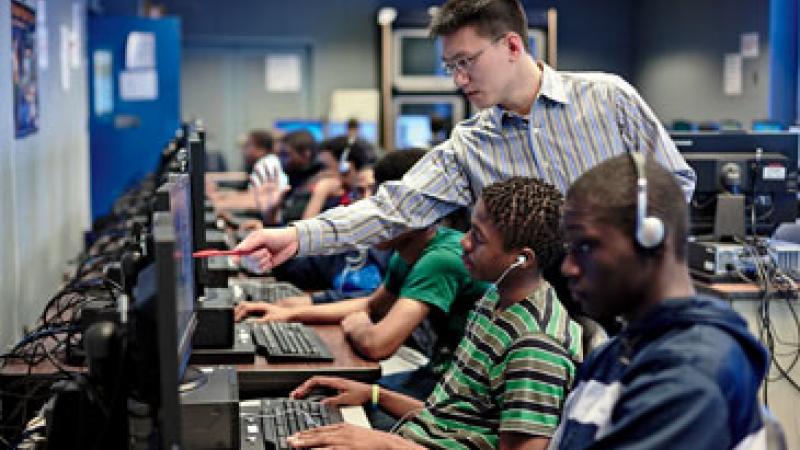 You might have heard about President Obama's planned visit today to the unique P-TECH high school in Brooklyn.

(A wacky sideshow -- really only relevent to those us who, like me, live in Brooklyn -- has been the confusion over the closing of parts of Prospect Park for the President's helicopter to land.)

If you're interested in learning more about P-TECH and its unique business partnership model that offers students associates degrees, Scholastic Administr@tor magazine has a profile of the school available online.

Here is an excerpt from it:

For a school that opened its doors in September 2011 and is still years away from producing its first alumni, Pathways in Technology Early College High School, or P-TECH, as it’s known, has gotten plenty of attention—most notably, a mention in President Barack Obama’s State of the Union address in January. There’s good reason for that. Its proponents—Principal Rashid Davis, foremost among them—believe the innovative program could transform American education. During an interview in his office, Davis points again and again to the signs on his bulletin board depicting the associate’s degrees students will receive if they complete the six-year course of study that combines high school and college, or “hollege,” as he is fond of calling it.

“Success is the students leaving with the associate’s degree,” Davis says. “That is the only definition.” The school offers two associate’s: one in computer information systems, the other in electro­mechanical engineering technology.

Thinking Big
The school, now finishing up its second year, is the result of a partnership between the New York City Department of Education, IBM, the City University of New York’s Early College Initiative, and the New York City College of Technology (City Tech).

P-TECH was developed with the idea of connecting education to solid career opportunities. A successful collaboration, IBM officials felt, would require the involvement of higher education, and of CUNY in particular, since the first marketable degrees for jobs at IBM and its clients are associate’s degrees in computer science or applied science.

Located in Crown Heights, a diverse, working-class neighborhood in Brooklyn, P-TECH shares a campus with two other schools charged with readying students for “real-world” employment. In fact, schools have been providing vocational education within the building’s walls for more than a century. (For more on the building’s history, see the sidebar “Then & Now.”)

IBM, which is providing mentors and hosting student visits, and has “co-­located” a program manager at the school, has promised that P-TECH graduates will be “first in line” for jobs that range from corporate help-desk staffers to systems and data administrators to Web designers, and have starting salaries of as much as $40,000 a year.