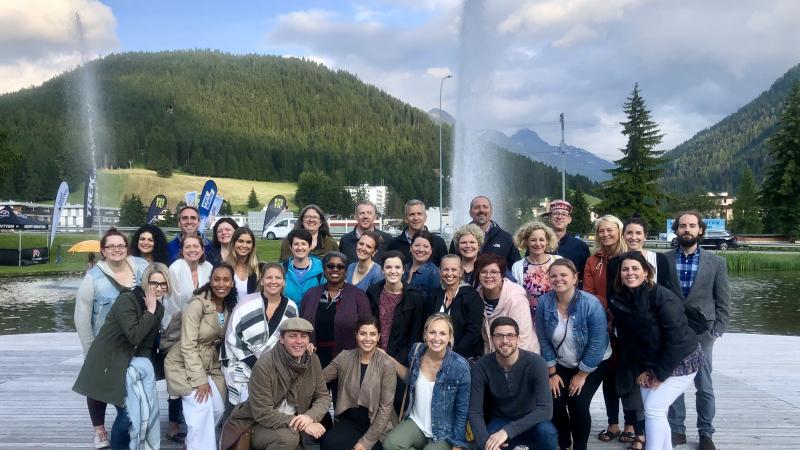 The Power of Storytelling to Bring School Communities Together

In a bright classroom, I listen, transfixed, as 21-year-old Ihab Sukkariya lyrically retells a brief but magical moment from a cafe in his hometown of Damascus, Syria. I understand none of his Arabic words, but the enchantment of the scene is clear in his voice—and in his co-storyteller Rachel Clarke’s English translation, equally musical through a light Scottish brogue.

I am in neither Syria nor Scotland, but in Berlin, Germany, along with 29 K–12 educators from across the United States, in a workshop facilitated by the Storytelling Arena. Clarke, a professional storyteller, founded the organization in 2015 to give newcomers a place to share their stories. Next, we hear three teenage refugees from Syria and Afghanistan recite poems, honest and wrenching verses about their experiences that they have composed and translated with the help of mentors at The Poetry Project, a similar organization. Here, you can read one of the powerful poems. I am on a professional learning tour with EF Educational Tours, a company that runs global learning trips for both students and teachers. Through carefully developed cultural exchanges, EF focuses on experiential learning, bringing people together, and expanding knowledge of the world.

Over five days, our travel group explores recent German history and the way it is told. The power of storytelling—and its role in the classroom—is a thread that runs through the trip.

We learn about the 28-year lifespan of the Berlin Wall and hear a discussion between authors from the former East and West Berlin. We note ubiquitous brass tiles among the sidewalk cobblestones, engraved with the names of Jewish people who had lived at those spots before being deported to concentration camps—each a brief, evocative story in itself. At the offices of news magazine Der Spiegel, we get insights into how the press reports the stories of today.

And we look closely at immigration. Since 2015, Germany has admitted about 1.5 million asylum seekers. The largest number are from Syria, but they also come from Iraq, Afghanistan, and other countries. We hear from groups committed to helping refugees adjust.

Which brings us back to storytelling, poetry, and us, the spellbound audience. It was time to shift roles. Rachel Clarke led us to workshop our own stories. The assignment: In one minute, tell a partner a success story from teaching. Partners then merged into groups of four to listen to each other, choose one story, and retell it together to the whole group. The result? In less than an hour, we were able to perform and watch half a dozen funny and touching stories, and learn that we all had the ability to take part by listening and sharing.

Creating a Space for Storytelling in the Classroom

So how might our storytelling experiences translate to classrooms back in the U.S.? Each teacher was inspired with unique ideas.

Wendy Meister-Louria, a high school ESL teacher in Vernon Hills, Illinois, wants her students—newcomers from three different continents—to feel comfortable in every classroom. Based on our experience in Germany, she plans to have her students prepare, practice, and videotape brief stories that illuminate who they are. The student-created videos can then be shared with all of their teachers as a way for them to better get to know their students.

Stacey McAdoo, Arkansas’ State Teacher of the Year, agrees. “The activities that we did, where we built a story starting with pairs and then expanding it out was a very low-risk way to engage my students in the art of storytelling.”

McAdoo teaches communications and AVID (Advancement Via Individual Determination) at Little Rock’s historic Central High School, where she is also the founder and sponsor of The Writeous Poets, a spoken word club. Today, Central High School houses an international studies program where more than 22 languages are spoken among the students. The power and personal nature of the poetry we heard during our trip didn’t surprise her. “That’s what I’m used to. That’s what poetry spoken looks like in my community. And that’s kind of the nature of slam poetry too.”

“But what I did very much appreciate was the translation portion of it,” she continues, referring to the poems we heard, most of which were translated from Arabic and Persian into German then English. As a teacher, McAdoo envisions collaborations with the foreign language department or pairing native and non-native English speakers to tell their stories together through original poetry.

Other ideas abound among teachers and administrators, across grade levels and subject areas. World history teacher Bridgette Profit, from Odessa, Texas, envisions having students step into the shoes of historical figures to tell their stories: “Tell a story of how Eratosthenes calculates the circumference of the Earth. Pretend you are Martin Luther at the Edict of Worms. Tell us his story.”

As an editor of Classroom Magazines, where our mission is to bring the world to students through stories, I’m excited to see the many ways storytelling can become a natural part of learning in schools everywhere. Across all of our titles, we cover powerful stories about young people around the world. Here, you can read a recent story from by Scholastic Scope Editorial Director Kristin Lewis about 15-year-old Bilan, who shares what her life is like growing up in a refugee camp.

Check back later this year for an update on how the teachers I met during this trip and their students have been impacted by our global travel. For now, here are more photos from the trip!

Header image caption: Teachers on tour, with EF Education First. After our time in Berlin, we continued to Davos, Switzerland, where we attended the EF Education First Global Leadership Summit, which brought together 1,600 students and 300 educators for three days of speakers, workshops, and innovative thinking.