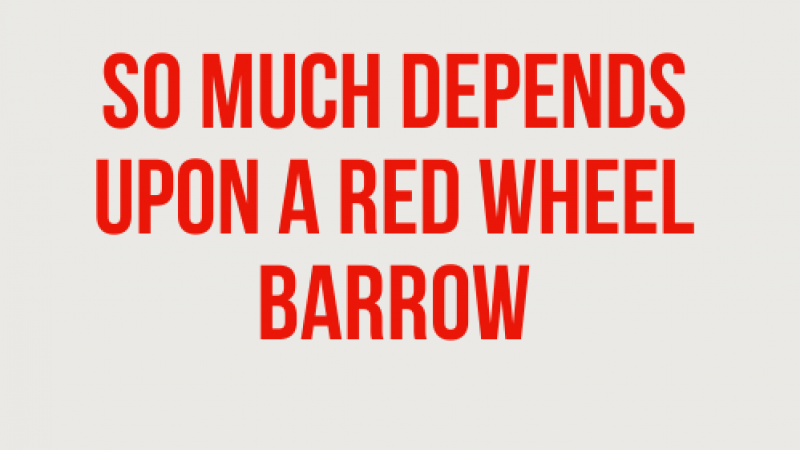 An ode to New Jersey poets

The title seems like an oxymoron. But my home state has more than its share of poets.

We even had a Poet Laureate, Amari Baraka, who was so outspoken that he almost got fired. Absent a legal way to dismiss him, the State Senate had to abolish his post.

That was back in 2003. But the law couldn't keep ballads from coursing through the veins of New Jersey residents. The place is too rich with material. Look at Springsteen, who finds inspiration on the New Jersey Turnpike, "ridin' on a wet night, 'neath the refinery's glow, out where the great black rivers flow."

There's a muse, it seems, at every toll booth, exit and jughandle—the latter a word that New Jersey invented. Jazzman John Pizzarelli sees poetry in "betting halls, shopping malls" and "good old Rutgers U," not to mention the "47 shoe stores [that] line Route 22."

In honor of National Poetry Month, here are five lyrical selections from the Garden State:

What think you I take my pen in hand to record?
The battle-ship, perfect-model'd, majestic, that I saw pass the
offing to-day under full sail?
The splendors of the past day? Or the splendor of the night that
envelopes me?
Or the vaunted glory and growth of the great city spread around me?--
No;
But I record of two simple men I saw to-day, on the pier, in the
midst of the crowd, parting the parting of dear friends;
The one to remain hung on the other's neck, and passionately kiss'd
him,
While the one to depart, tightly prest the one to remain in his arms.

Should Heaven send me any son,

I'd rather have him play a fiddle

Than rise and bow and speak an idyll.

I’d throw in my United States, and pour on the Ivory Soap, scrub up Africa, put all the

birds and elephants back in the jungle,

I’d wash the Amazon river and clean the oily Carib & Gulf of Mexico,

Rub that smog off the North Pole, wipe up all the pipelines in Alaska,

Rub a dub dub for Rocky Flats and Los Alamos, Flush that sparkly Cesium out of Love

Rinse down the Acid Rain over the Parthenon & Sphinx, Drain Sludge out of the

Put some blueing back into the sky over the Rhine, bleach the little Clouds so snow

Cleanse the Hudson Thames & Neckar, Drain the Suds out of Lake Erie

Then I’d throw big Asia in one giant Load & wash out the blood & Agent Orange,

Dump the whole mess of Russia and China in the wringer, squeeze out the tattletail

& put the planet in the drier & let it sit 20 minutes or an Aeon till it came out clean.

I suffer from it. My heart always seems to be prowling

a mile ahead of me, and, by the time I get there to surround it,

it's chewing fences in the next county, clawing

the bank-vault wall or smashing in the window

I'd just started etching my name on with my diamond.

And that's how come I end up on the roof. Because even if I talk

into my fist everyone still hears my voice like the ocean

in theirs, and so they solace me and I have to keep

breaking toes with my gun-boots and coming up here

to live—by myself, like an aerial, with a hand on the ledge,

one eye glued to the tin door and one to the skylight.

Great post. I was checking continuously this blog and I'm inspired! Very useful info specially the remaining phase :) I maintain such information a lot. I used to be seeking this particular information for a very lengthy time. Thank you and good luck.