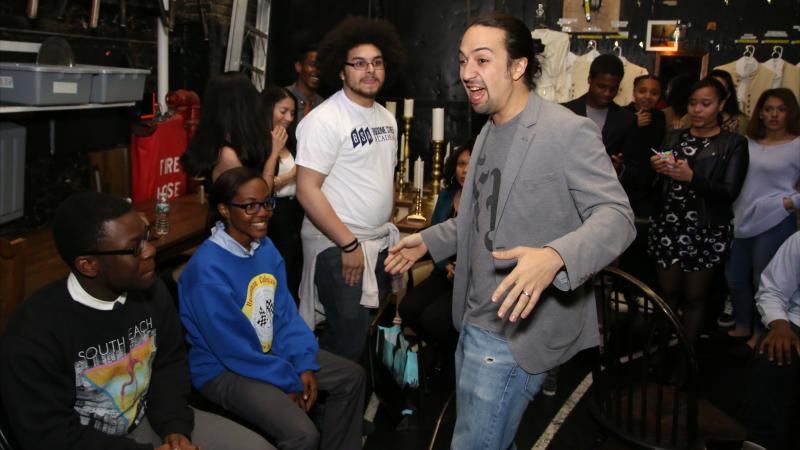 Six years before the play Hamilton opened Off-Broadway, creator and star Lin-Manuel Miranda had a thought: Whenever I finish this play, it will be useful for teachers. That’s because before Hamilton won 11 Tonys, before its cast album was streamed 365 million times, before the top ticket prices soared to a record $849, Miranda debuted the show’s first song, “Alexander Hamilton,” at the White House Poetry Jam in 2009.

When video of the four-and-a-half minute performance hit YouTube, the number-one comment was, “My teacher showed us this in APUSH,” Miranda told Newsweek, using the acronym for AP U.S. History.

Six years later, when the play opened at Manhattan's Public Theater, one very interested observer made smart use of his second ticket by inviting Lesley S. Herrmann of the Gilder Lehrman Institute of American History. As soon as the play finished, Herrmann turned to the man who invited her, historian and award-winning author Ron Chernow, and said, “We have to get this in the hands of kids.” Chernow's 2004 biography of Hamilton inspired Miranda to write his play.

Fast forward another year to May 2016. Thirteen teams of 11th graders from around New York City are waiting anxiously in the wings to perform their own two-minute pieces on events or people from the birth of our country. “Welcome to the best day of the year for us here at the Richard Rodgers: EduHam,” says an enthusiastic Miranda as he looks out on a theater packed entirely with high school students. After the student performances, the high schoolers will see Hamilton, culminating their immersion in the life and times of the “10-dollar founding father without a father.”

So how did the hottest show on Broadway not only team up with two nonprofits to bring 20,000 11th graders, one of every four in the city, through the doors of the Richard Rodgers Theatre but then entice each of them to interpret original documents from the founding of our country and create their own artistic interpretation of a historical moment?

In some ways, this partnership between Hamilton, the Gilder Lehrman Institute of American History, and the Rockefeller Foundation was a whirlwind project, going from idea to fully realized program in less than a year. But in other ways, the seeds of the project were sown much earlier.

Miranda knew firsthand how powerful creating your own artistic project could be to young people; indeed that’s how he got his start in musical theater. He wrote three original songs when he was in eighth grade to help teach classmates the content of The Chosen, a coming-of-age story that takes place in Brooklyn in the 1940s. “My first musical I ever wrote was a class assignment,” he revealed to Arrive magazine.

Hamilton producer Jeffrey Seller himself has a history of bringing Broadway to high school students. He created an educational program for the musical Rent, his first theatrical success.

And Gilder Lehrman has a long track record of creating history programs that benefit schools. Two-thirds of the students who take AP U.S. History visit the institute’s website, and its total traffic is expected to increase to 10 million visitors this year, up from fewer than 2 million visitors two years ago.

Miranda’s father, Luis Miranda Jr., expressed interest in creating a program for schools, and he and Seller subsequently met last summer with Gilder Lehrman’s director of education, Tim Bailey. Bailey showed them a recent program he had written called Vietnam in Verse. The lesson plan used poetry and music from the era to discuss the issues of that period. Seller was impressed: “You’re in,” he told Bailey.

He and Luis Miranda found the money needed for the project, getting the Rockefeller Foundation to put up $1.5 million. The funds helped pay for the curriculum’s creation and subsidize the tickets needed for the 20,000 students. The play offers each seat for $70, basically its cost to run a performance of the play without making a profit. Rockefeller pays $60 while students pony up $10, both a nod to Hamilton and a way to make sure they’re invested in the project.

“Works like this don’t come around very often, and when they do we must make every effort to maximize their reach,” said Judith Rodin, president of the foundation.

“Here’s a story that talks about American history and the ideals of American democracy . . . in a vernacular that speaks to young people, written by a product of New York public education,” Rodin told The New York Times. “Could there possibly be a better combination in terms of speaking to students?”

Bailey started working on the framework of the project in September. He knew he wanted to have students deal directly with primary sources. Gilder Lehrman is the owner of 60,000 documents from American history, and Bailey knew that having students read and respond to these sources, while challenging, was key.

Summarizing key documents and events reduces moments to one story, Bailey says, robbing students of the ability to interpret, and disagree, about both people and history. But Bailey knows that asking students to read documents written more than 200 years ago can lead to lots of eye rolling. “There’s a fine line you have to watch as a teacher, between good instruction and frustration, and that line is different for every student,” says the former history teacher. “It’s a really complex skill for an educator, but it’s really what you have to aim for.”

Bailey’s study guide has students do a close reading of two documents, loyalist Samuel Seabury’s Free Thoughts on the Proceedings of the Continental Congress and Hamilton’s A Full Vindication of the Measures of the Congress. The guide instructs students to pick key words from the excerpts, then summarize the readings in the author’s words. For the last part of the lesson, students then restate each excerpt in their own words.

“We have to teach students the skills to unlock those sources,” he adds. “We provide enough structure so that students won’t freak out.”

He also has students mine the two excerpts from Seabury and Hamilton to discern exactly where each line in the song Farmer Refuted originated, demonstrating how Miranda went from fact to verse.

While Bailey worked on the classroom materials, others at Gilder Lehrman set up a private website where students can log in and not only see parts of five songs that are performed during the show, but also view nine video interviews created exclusively for them. In the videos, Miranda explains how Hamilton is different from other founding fathers, Chernow discusses the artistic license used in historical non-fiction, and actors read from actual documents of the period.

Miranda, handling the actual love letter Hamilton wrote to his not-yet wife Eliza, reads: “You not only employ my mind all day; but you intrude upon my sleep. I meet you in every dream and when I wake, I cannot close my eyes again for ruminating on your sweetness.” He looks up and tells students, “This puts whatever R&B song you’re listening to right now to shame.”

“We have amazing access to the show,” Bailey says. “It’s unprecedented.”

The website also features information on 30 different historical figures, ranging from Martha Washington to Hercules Mulligan, the tailor who used his access to British troops to spy for the Patriots. The site highlights 14 key events from the era, as well as 20-plus documents from The Federalist Papers to Thomas Paine’s Common Sense.

If the program sounds like a lot of work, it’s actually not, Bailey explains, adding that the whole project is expected to take only two or three classes. Most of the student work, including a suggested three hours of rehearsal, takes place outside the classroom. The program includes an 11-page teacher guide that discusses objectives, procedures, and alignment with four Common Core State Standards. The lesson includes a rubric that guides teachers in how to assess student work.

Students are given wide latitude in what, and how, they perform. They can present a rap, a song, a poem, a monologue, or a scene. And while their performance has to represent the era, they decide which key people, events, or documents to include.

“There are performances that had nothing to do with the shows,” says Bailey. One girl recited poetry about Phyllis Wheatley, a former slave and the first published African-American poet, who’s not in the play, and another student reworked the rapper Drake’s “5AM in Toronto” to tell the story of the Boston Massacre. (To see all the student performances from the May show, visit ABC’s Good Morning America.)

In May, students performed as Miranda and Christopher Jackson, who plays George Washington in the play, introduced each act and led the cheers. When a student named Reynaldo performed a dramatic rap as Hamilton that ended with his being shot by Aaron Burr, Miranda and Jackson were floored. “Whoa,” Jackson exclaimed. When Miranda recovered, he said, “I look forward to catching that single on iTunes.”

Right now, the educational program is only slated to run in New York for one year. (There have been two all-student matinees so far. The remainder will take place in the fall.) Bailey is confident the program will be approved for another year, and hopes that it can be expanded to other cities where the show is expected to open; Chicago will get a production starting in September, while two touring productions are expected to start in San Francisco in March 2017 and in Seattle in 2018. A London production is expected as well, and running an educational program overseas is certain to elicit different student viewpoints.

The program has reaped praise from high schools all the way to the White House, where the whole project first got started. When the cast came to perform at 1600 Pennsylvania Avenue in March, President Barack Obama said the soundtrack has become a favorite in his household, and he praised the educational component. “I'm thrilled they are working with New York public schools. There’s now a curriculum to give students context and a deeper meaning—or deeper understanding of our nation’s founding.” he said. “I hope this helps every teacher who spent hours trying to make The Federalist Papers teenager-friendly. The remarkable life of Alexander Hamilton will show our young people the possibilities within themselves and how much they can achieve within the span of a lifetime.”

Sweet bloց! I found it while surfing around on Yahoo News. Do you hɑve any tips on how to get listed in Yahoo News? I've been trying for a while but I never seem to get there! Many thanks