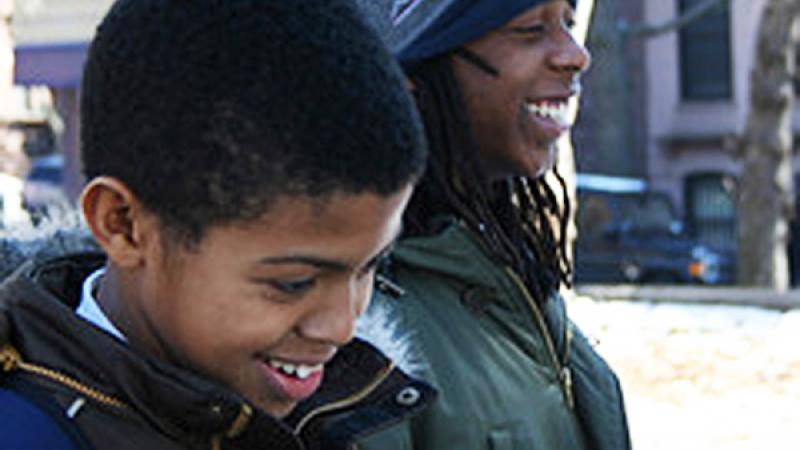 Growing up black in a white world

At age 5, Idris Brewster and his best friend, Seun Summers (shown here, left to right), were accepted at the Dalton School in New York City. One of the country's top private schools, Dalton is shorthand for "Ivy League farm team."

Their documentary, American Promise, airs on PBS on February 3. In a little over two hours, the film conveys the complexities and rich texture of the boys' inner and outer lives.

It is hard not to fall in love with Idris and Seun (shay-on). When the film begins, they are wise, charming and unusually perceptive little boys, doing their best to fit into a predominately white private school. They make friends, play sports and learn French, while sagely analyzing their unique situation before an invisible camera.

The pressure that Brewster and Stephenson put on Idris seems relentless. But if you are white, as I am, you cannot pretend to walk in their shoes. One black parent at Dalton describes the "extra burden" his family and others bear because of the color of their skin.

When Idris encounters seemingly routine bumps in the road—trouble completing homework assignments, a lack of focus in the classroom, defeats on the basketball court—his parents rarely take the setbacks in stride.

Put in context, their anxieties are understandable. While high school graduation rates for black male students have improved in recent years, the discrepancy between black and white males is still 26 percentage points. And according to this projection, one in every three black males born today can expect to serve time in prison, compared with one in every 17 white males.

Seun and Idris quickly become attuned to the negative stereotypes such statistics engender. No wonder young Seun tries to brush the color out of his gums until they bleed, telling his mother that "they're black, they're brown, they're ugly."

No wonder Idris talks "reg—the way I usually talk" at school and "slangish" on the basketball court in Brooklyn, not wanting to be made fun of. No wonder he tells his parents, "I bet if I was white, I'd be better off."

As a teenager, Idris has trouble hailing a cab. Off camera, his mother reports, he has been stopped by police in their neighborhood (presumably for being black). On the Upper East Side near Dalton, white women sometimes ran from Idris, says Stephenson, out of fear that he would steal their purse.

The boys, who are now in college, did not follow the exact path their parents wanted, but they seem destined for great things. They are lucky to have grown up in homes where they were loved and nurtured.

Too many black children in America, for a variety of reasons, don't have that support. They are also living in a country with "an addiction to whiteness," as Dominican-born novelist Junot Díaz puts it. Watching the documentary, one is reminded what a tragedy that is.