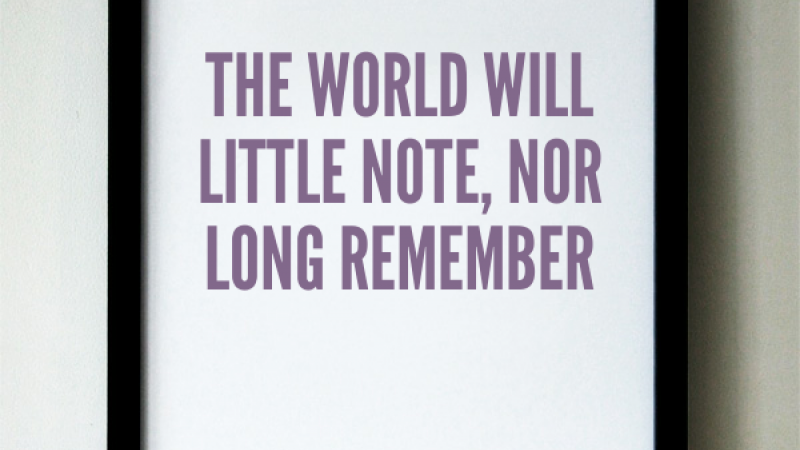 "The world will little note, nor long remember," President Abraham Lincoln said on a Pennsylvania battlefield 150 years ago today. Little note? Lincoln's eulogy to the Civil War dead is among the most iconic, memorable, moving, and [insert adjective here] in the English language.

Why does the Gettysburg Address still hold such power? Lincoln's knowledge of the Bible and Shakespeare cannot be discounted. In 2007, Adam Gopnik wrote in The New Yorker that "Lincoln had mastered the sound of the King James Bible so completely that he could recast abstract issues of constitutional law in Biblical terms, making the proposition that Texas and New Hampshire should be forever bound by a single post office sound like something right out of Genesis."

What exactly Lincoln said on the battlefield at Gettysburg—in the days before there were recording devices—remains a matter of dispute. Personal preferences have also played a role in the transcription of history. As Gopnik notes: "The Centralia Sentinel, of Lincoln's home state, wanting nothing to do with fancy talk, had the speech begin, simply, 'Ninety years ago....'" The Sentinel didn't even get the number right!

In the end, Gopnik concludes: "The past is so often unknowable not because it is befogged now but because it was befogged then, too, back when it was still the present."

For all we think we know about Lincoln, 150 years later, he remains unknowable.