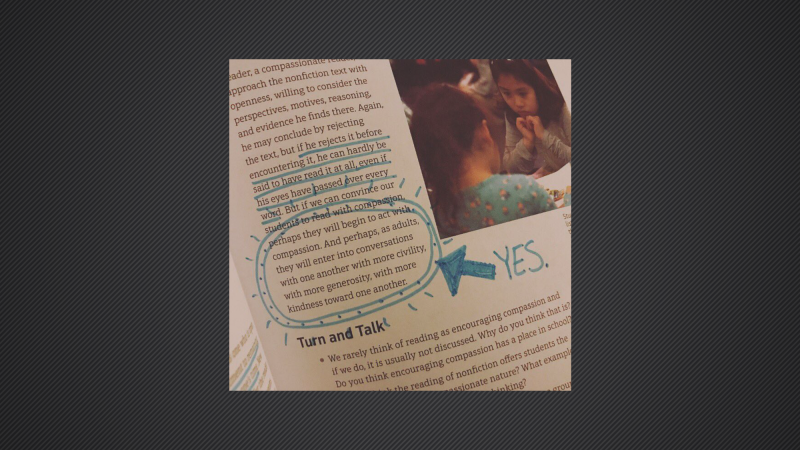 #DisruptingThinking: "I want to hug this book. Then high five it."

In Disrupting Thinking: Why How We Read Matters, award-winning authors Kylene Beers and Bob Probst present reading as a transformational process, rather than simply an act of decoding, recalling, and responding to questions. Beers and Probst introduce their Book, Head, Heart (BHH) Framework, which encourages readers to ask themselves questions like, what does this author want me to know? What surprised me? How could this change how I feel?

Beers & Probst describe the framework: "It's simple. Direct. And it keeps the kids focused on where they must begin—with what's in the book—and with where they must end—with how it's changing them." (Disrupting Thinking, 63)

Disrupting Thinking is proving that it's not just students who are changed—the book is inspiring fervor among educators, who gather on Twitter at #DisruptingThinking to discuss their reactions.

Indeed, it is the BHH Framework in action!

Below is a sampling of reactions—from an administrator, school principals, literacy specialists and coaches, librarians and many teachers—from the book, from the head, and from the heart.

I want to hug this book. Then high five it. And then hug it again. This is a goal of mine as a lit coach. #DisruptingThinking #d100pride pic.twitter.com/1Vd14hV534

I'm only on P. 27, and it's already living up to the hype. #DisruptingThinking #2ndaryela pic.twitter.com/pRMvw1HetH

This bk has me thinking abt my own practices/beliefs/thinking. Wish we could get it into hands of more Ts. #bookaday @KyleneBeers @BobProbst pic.twitter.com/YFQ0mVDPA9

More from #DisruptingThinking - I like how these interest and relevance are differentiated here #BookSnaps pic.twitter.com/KVE1hB5cQ3

Relevance! It's all about relevance! And interesting isn't the same as relevant! #DisruptingThinking @KyleneBeers @BobProbst pic.twitter.com/HSqGH4EiHS

BHH -What's in the book? What's in your head? What did you take to heart? LOVE this!!#DisruptingThinking pic.twitter.com/HkJenVa1xQ

When you love it so much you just circle the whole page #DisruptingThinking pic.twitter.com/Wwrar9vV3h