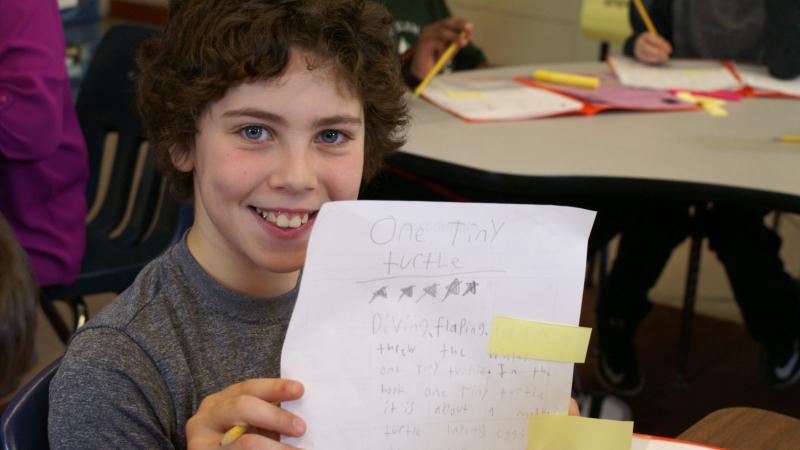 As educators, we care about the conventions of written language, such as grammar, sentence structure, word knowledge, capitalization, punctuation and spelling. And we are not alone. The parents of the children we serve, the community, and the nation expect children to show growing expertise in those conventions.

Unfortunately, conventions have traditionally been taught through worksheets, drills, and “red-lining” that leave children believing that conventions are about “correcting” and “being right.” This is a dangerous stance because it can lead children to perceive that writing in general is about correcting and being right. When they’re overly focused on correctness, writers may emphasize spelling over ideas. They may use simplistic sentence structures to be certain everything is “right.” This approach limits a child to what he or she can already do, rather than letting language flourish through his or her evolving sense of meaning and imagination. However, if we recast conventions as craft elements—tools that allow writers to add clarity and interest to their work—children can make writing sizzle, and they soon begin to “craft” their work, rather than just “correct” it.

How to Help Student Writing Sizzle

Using research that supports the power of short, highly interactive windows of instruction, I began working with elementary-age students to see the impact on their writing when they experienced daily “micro-workshops” focused on conventions as craft elements.  I selected one convention each week, which I focused on over five days—across a variety of contexts and applications. The weekly plan went as follows:

I have learned to trust in the power of wonderful mentor texts—nonfiction trade books, magazine articles, and student pieces—to expose students to literary language, form, and craft. A mentor text is one of our most potent tools for helping children notice and celebrate the interesting ways writers use sentence structure, grammar, punctuation, and capitalization. By reading aloud from a well-crafted, high-interest mentor text, I demonstrate conventions in a rich and meaningful context. I also project a few passages from the text so writers have up-close visual access to the way the author used particular conventions. It has been proven that students benefit from observing as an adult composes a piece of writing in front of them, so a great deal of modeling is critical. I think aloud, so my reasoning is transparent as I use the target convention in my own piece. As is true of a read-aloud selection, modeled writing should set high expectations for complex and well-crafted student work. This micro-workshop provides partners with a chance to analyze a student writing sample for the week’s target convention. First, writers praise something about the piece and then decide if the convention is present. From there, partners analyze the piece more closely for possible revisions, adding the target convention if possible. The sample could be from a student in class or from the Conventions and Craft website. On the fourth day, students survey their writing folders, science logs, writers’ notebooks, and other sources of their own writing, to see if they have used the target convention. If they have, they mark it with a sticky note or highlighter. If they haven’t, they consider options for adding it. Finally, writers partner up and share their reflections on their writing.

The Power Burst Review that concludes each lesson cycle is designed to provide an interactive experience in which students review the target understanding of the current cycle or a previous one, depending on students’ needs. Writers love doing Secret Sentences, Scavenger Hunts, Expanding Fragments, Sentence Combining, and other Power Burst experiences. Day 5 is a celebration of what they know and can apply in many contexts.

Devoting ten minutes a day on the write moves with conventions brings high energy and excitement from students. Ten minutes is long enough for writers to focus on a target understanding, but not so long they get overwhelmed or bored! And with rich conversations about how to “craft” writing rather than just “correct” it, both writing and conventions flourish!

This learning sequence—weekly lesson cycles made up of five 10-minute micro-workshops—forms the backbone of Conventions and Craft, a full year of instruction in grammar, sentence structure, word study, and other conventions. In addition to weekly lesson cycles, it contains mentor texts to share, student writing samples to analyze, and a wide array of energy-building Power Burst Reviews—as well as video lesson demonstrations for professional learning. We hope you will join us is helping writers to recast conventions as craft elements!

All photos from Linda Hoyt